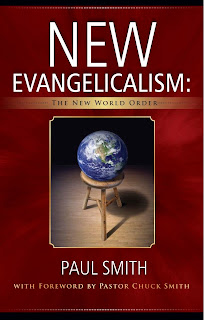 "In a nutshell, Harold Lindsell found himself walking on eggs. The seminary was growing. Daniel Fuller, the only heir to the founder, was on the faculty. Young Fuller was on leave and abroad studying corrupted theology that denigrated the view of biblical inerrancy. The acting seminary president, Edward Carnell, was unable to act due to health. Negative tension was growing between Ockenga, the founding president, and Charles Fuller, founder of the seminary. Charles Fuller, of course, loved his son and grandchildren. Charles Fuller was conflicted over whom he could lean on for advice. And, as he was growing old, his health and energy were significantly decreasing.

"So by 1960, irreparable changes were in the making at Fuller Seminary, just thirteen years after its beginning. Early that year Harold Lindsell and Charles Fuller exchanged correspondence concerning the thrust and outreach of the seminary. . . ." (p. 80)

One day, several years after I co-authored the monograph The Pied Pipers of Purpose,[1] I received a telephone call from Pastor Paul Smith. He was quite fascinated by our factual information about Peter Drucker, the business guru who developed the 3-legged stool paradigm for societal transformation. He told me how Peter Drucker was actively wooing megachurch leaders during the 1980s to persuade them to join up with his giant social experiment. The story of Peter Drucker's pervasive influence is told in Paul Smith’s new book NEW EVANGELICALISM: The New World Order (Calvary Publishing, 2011). The Foreword is written by Pastor Chuck Smith of Calvary Chapel, Paul's brother.

This book is an historical account of the deep compromises of the past several generations of evangelical leaders. These concessions have left the current church in a state of “crisis and confusion.” Pastor Paul traces “the seminal seeds that corrupted not only the major denominational churches, but specifically the conservative believing folks in these churches” (Introduction). This is a book about the history of the postmodern movement within evangelicaldom, and especially the roles that Fuller Theological Seminary and Peter Drucker played in shaping the leaders that would guide the Emerging (Emergent) Church Movement. Pastor Paul observed firsthand how

“The rise and development of the Emerging (Emergent) Church Movement became both a significant collaborator and delivery system for the major paradigm shift that has affected and infiltrated the mindset of many evangelical pastors. The shift includes the new evangelical notion that the church must become postmodern in order to reach secular America. The shift includes a definitive move away from belief in absolute truth. The shift, sadly but most importantly, includes the accommodating and compromising retreat by many from the belief that the Bible is without error.” (Introduction)

While writing this book, Pastor Paul gained access to rare old files and letters documenting deep compromises certain evangelical leaders made with liberalism and the steps they took to abandon the doctrine of biblical inerrancy. He traces the rise of the modern neoevangelical movement and its downward slide into the neo-orthodoxy of Karl Barth. He observes that Harold Ockenga, in his desire to free himself from the term “fundamentalist” with its disparaging connotations, “envisioned a new generation of non-militant conservatives who were pursuing intellectualism, non-judgmentalism, and appeasement; applying the gospel to the sociological, political, and economic areas.” (p. 88) This "appeasement" opened the door to the vast modern-day “social gospel.” Neoevangelicalism “differed from fundamentalism in its repudiation of separatism and its determination to engage itself in the theological dialogue of the day.”[2] In hindsight we now know just how far down the slippery slope the leaders were willing to take this “repudiation of separatism” creed in order to become acceptable and accommodating to the world.

Fuller Theological Seminary played a key role in abandoning the doctrine of biblical inerrancy, and this opened the floodgates for every sort of new doctrine and practice. Pastor Paul observes:

“Fuller Seminary’s compromise and accommodation were the twigs and brushwood that became the nest for aberrant practice, where workers are prepared for the twenty-first century postmodern Emerging church.” (p. 102)

Pastor Paul documents the step-by-step accommodation with the world that happened at Fuller, including the rise of the social gospel, Mysticism, Feminism, the Emergent Church and Church Growth movements, the new missiology, and the influence of C. Peter Wagner. Pastor Paul sets forth the thesis that in the context of this fertile Fuller seedbed of postmodernism, Peter Drucker’s ideas found sustenance, grew strong and began to bear a terrible fruit. Pastor Paul explains that

“Drucker was intrigued with the megachurch from a specifically sociological and economic point of view. Any megachurch would do just fine; as long as it was pragmatically meeting the felt needs of people. The spiritual beliefs of a particular megachurch were really not a concern for Drucker. So it made sense to him that the ambiance of the megachurch should be, above all, seeker friendly. After all, his personal pursuit of spirituality was fulfilled in Kierkegaard and Eastern mysticism.

“The downhill ride on the slippery slope picked up more influential people in America and evolved into a most ominous unbiblical Emerging movement….” (p. 123)

The chief strength of New Evangelicalism: The New World Order is that Paul Smith accurately cites Peter Drucker as the father of both the Emerging and also the megachurch purpose-driven movements. Bob Buford's Leadership Network hatched both of these agendas which dovetail seamlessly into the postmodern Emergent paradigm shift, and Pastor Smith delivers a factual account of this with historical precision. His own personal experience with Drucker and Buford is divulged on page 149:

“Chuck Fromm arranged for me to spend three days at the Hilton Hotel in Ontario, California in the mid-eighties, where Peter Drucker addressed a group of church leaders and seminary professors. Bob Buford sponsored the meeting. At that meeting Buford explained to us that leadership communities are small groups of innovators and thought leaders pursuing a common ministry outcome, sharing ideas, developing strategy, and benchmarking measurements. Leadership Network discovered Emerging ministry initiatives and carefully invites strategic leaders into these communities of peers who are seeking to improve their personal and organizational performance in the focused outcome areas.”

Pastor Paul explained to me that in this time period the Calvary Chapel movement had over 50 megachurches of over 1000 members, so it was a prime target for the machinations of Peter Drucker and Bob Buford. But, to their credit, the Calvary leadership refused these wooings. There would be a heavy price to pay in the future, however. Those who compromised with the Druckerian vision of the church as an "optimum sociological community" that could transform "the nature of man and society" (pp. 127-8) were rewarded with success and the accolades of men.

Rick Warren, for instance, went on to purpose-driven fame, driven by Drucker who mentored him, and coddled at Fuller Seminary where he received his DMin under the tutelage of C. Peter Wagner, head of the New Apostolic Reformation.[3] After building his purpose-driven empire, Warren began to work on the mountains for world governance, his Global P.E.A.C.E. Plan scheme, which would begin to create an international purpose-driven new world order. Rick Warren’s high level cavorting with high level globalists is the fascinating topic of Chapter 11, “New Evangelicals in the New World Order.” In this chapter Pastor Paul describes how “Emergent church leaders are focused on unity and a worldwide oneness reflected in the growing union between Eastern and Western cultures and thinking.” (p. 168)

This book is highly recommended.[4] It is very easy to read and digest. It is one of those rare books that can comfortably be given to pastors. It is based on solid research and there is a clear Gospel message. It is written with the heart of a pastor, who cries out a warning to believers in these last days to not be deceived.

This book is available through the Discernment Ministries. Check HERE for prices and availability.

"For false Christs and false prophets shall rise, and shall shew signs and wonders, to seduce, if it were possible, even the elect." (Mark 13:22)

"These things have I written unto you concerning them that seduce you." (1 John 2:26)