“God has filled the Scripture with Truth”

Meditating upon and searching the Scriptures 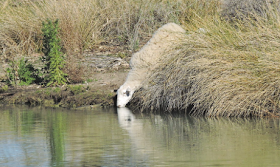 “Whereas it is said, To-day if ye will hear His voice,
harden not your hearts, as in the provocation.”
(Heb. 3:15)

Selected excerpts from an exposition of Hebrews 3:15 regarding hearing God's Word and its effect on our heart*

Psalm 138:2: “He hath magnified His Word above all His name;” or made it more instructive than any other way or means whereby He has revealed Himself. For not only does the whole Scripture contain the whole counsel of God, concerning His own glory and worship, our faith, obedience, and salvation, but also every parcel of it has in it such a depth of truth as cannot by us be perfectly searched into.

Psalm 119:18: “Open Thou mine eyes,” says the psalmist, “that I may behold wondrous things out of Thy law.” There are wonderful things in the Word, if God be pleased to give us light to see it. It is like a cabinet of jewels, that when you pull out one box or drawer and search into it, you find it full; pull out another, it is full; and when you think you have pulled out all, yet still there are some more secret recesses in the cabinet, so that if you search further you will find more.

Our apostle seems to have drawn out all the boxes of this cabinet, but making a second search into the words, he finds all these things treasured up, which he had not before intimated nor touched upon.

It was said by some of old, that the “Scripture hath fords where a lamb may wade, and depths where an elephant may swim.” And it is true in respect of the perspicuity of some places, and the difficulty of others. But the truth is also, that God has in His grace and wisdom so ordered its concernments, that… many, most, yea, all the particular places of it and passages in it are such as through which a lamb may wade safely, and an elephant swim without danger of striking against the bottom.

Let any lamb of Christ come, in that order, with that reverence unto the reading or hearing the Word of God (the Scripture itself I mean) which is required, and he will find no place so dark or difficult but that it will yield him that refreshment which is suited unto him and safe for him, and something of God he will obtain. For either he will find his graces excited, or his mind enlightened, or his conscience peculiarly brought into a reverence of God. 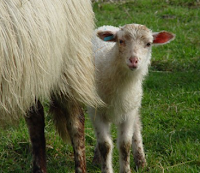 And let the wisest, the most learned and experienced person, that seems like an elephant in spiritual skill and strength amongst the flock, come to the plainest place to search out the mind and will of God in it, if he be humble as well as learned, – which if he be not he is not wise, – he will scarce boast that he has been at the bottom of it, and hath perfectly comprehended all that is in it, seeing whatever we know, “we know but in part.” [1 Cor. 13:12]

And they may all of them, elephants and lambs, meet at the same passage of this river that makes glad the city of God, these waters of rest and quietness (Psalm 23:20) where the lambs may wade safely, and the elephants swim together. The poorest of the flock, in the right use of means, may take enough for themselves, even suitable direction and refreshment, from those very places of Scripture whose depths the learnedest guides of the church are not able to sound or fathom. 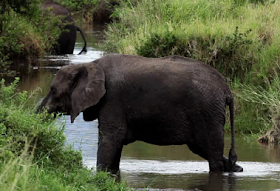 Not only in several places, but in the same place, text, or testimony of Scripture, there is food meet for the several ages of Christians, whether babes and children or strong men; with light and direction for all sorts of believers, according to the degrees of their own inward light and grace.

It is like manna, which, though men gathered variously according to their strength and appetite, yet every one had that proportion which suited his own eating.

When a learned man, and one mighty in the Scriptures, undertakes the consideration of a place of Scripture, and finds, it may be, in the issue, that with all his skill and industry, with all his helps and advantages, though attended in the use of them with fervent prayer and holy meditation, he is not able to search it out unto perfection, let him not suppose that such a place will be of no advantage unto them who are not sharers in his advantages, but rather are mean and unlearned. For they may obtain a useful portion for themselves where he cannot take down all.

If any one look on this river of God like behemoth on Jordan, “trusting that he can draw it up unto his mouth,” [Job 40:23] or take up the whole sense of God in it, he of all others seems to know nothing of its worth and excellency.

And this arises… principally from the things themselves treated of in the Scripture. For, divine and spiritual truths having God not only as their immediate fountain and spring, but also as their proper and adequate object, there is still somewhat in them that cannot be searched out unto perfection. As He said, “Canst thou by searching find out God? Canst thou find out the Almighty unto perfection?” Job 11:7,– [Hebrew taklîyth] “find him out to a perfect comprehension,” or “to a consummation of knowledge,” that it should be perfect. This neither the nature of God nor our condition will admit of.

We do at best but “follow after,” that we may in our measure “apprehend that for which we also are apprehended of Christ Jesus” (Phil. 3:12). And these things are so tempered by divine wisdom unto the faith and light of believers, and therein unto the uses of their consolation and obedience, that something hereof is plainly exhibited to every spiritual eye – always provided that their search and inquiry be regulated according to the will of God, in a due use of the means. For to this purpose not only the private endeavors of men are required, but the use also of the public ministry, which is ordained of God to lead men gradually into continual further acquaintance with the will of God in the Scripture.

Some think that it belongs unto the fulness of the Scripture that each place in it should have various senses,– some way three, some four. But this, indeed, is to empty it of all fulness; for if it have not everywhere one proper determinate sense, it hath none at all. This it has; but the things which the words of it are signs of and are expressed by, are so great, deep, and mysterious, and have such various respects unto our light, faith, and obedience, as that it is unsearchably instructive unto us. “The commandment is exceeding broad,” (Ps 119:96) [Hebrew râchâb];– the word used to express the wideness of the sea, Psalm 104:25,– “The great sea,” that hath “wide and large arms,” which it stretches out to comprehend the whole earth. So does the command widen and stretch out its arms, to comprehend the whole church of God, to water it and to make it fruitful. 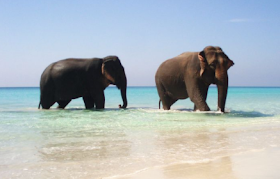 God having stamped His authority and wisdom upon it [Scripture], every concernment of it, every consequence from it, every circumstance reported in it, has its authority in and upon the consciences of men for the end whereunto it is designed….

And this may teach men what diligence they ought to use in searching and studying of the Scripture….

Especially is this incumbent on them whose duty and office it is to declare and expound them unto others. And there is amongst many a great miscarriage in these things, and that both in some that teach, and some that only privately read or meditate on the Word.
Such persons as these see little of the wisdom of God in the Word; they enter not into those mines of gold; they are but passengers, they do not “stand in the counsel of God, to hear His Word” (Jer. 23:22).

It is certain that the diligent search into the Scriptures which is commended unto us, which the worth of them and the things contained in them requires, and which that fulness and comprehension of truth that is in them does make necessary, is by most neglected. And the same may be observed in multitudes of commentators and expositors. They express things otherwise one than another, but for the most part directly the same. Seldom any one ventures into the deep one step beyond what he sees his way beat before him, and, as he supposes, his ground secure; though a diligent inquirer may often find the most beaten path either to turn away from the fountain, or at least to end and fail before it comes there.

I would not speak anything to encourage men in bold adventures, groundless conjectures, and curious pryings into things hidden, secret, and marvelous; but it is humble diligence, joined with prayer, meditation, and waiting on God for the revelation of His will, in the study of the Scripture, upon the account of the fulness of its treasurey, and the guiding, instructive virtue wherewithal its concerns are accompanied, that I would press after.

And hence I am persuaded that the church of God hath, through His care and faithfulness, had great advantage from their opposition unto the Truth who, to countenance their own errors, have searched curiously into all the concernments of the words of many testimonies given unto the Truth. For though they have done this to their own destruction, yet “out of this eater there hath come forth meat.” For they have not only given an occasion unto, but imposed a necessity upon us to search with all diligence into every concernment of some most material passages in the Scripture, and that to the clearing of the Truth and the establishing of the minds of many.

That which I would press from these considerations,… is, that our utmost diligence, especially in them who are called unto the instruction of others, is required in this neglected, yea despised work of searching the Scriptures.

And as a consequent of the neglect hereof, I cannot but say that I have observed a threefold defect amongst sundry teachers, that was in general intimated before; as,


“These [Bereans] were more noble than those in Thessalonica, in that they received the Word with all readiness of mind, and searched the scriptures daily, whether those things were so.”
(Acts 17:11)

“Search the scriptures; for in them ye think ye have eternal life: and they are they which testify of Me.”
(John 5:39)